This is definitely one of my all time favorite sandwiches! I first had it on a flight from Atlanta to Florida a LONG time ago. It was on an airline that was making their first flight so I’m sure they were really trying to impress the passengers…this sandwich worked for me!

Even though I still remember how wonderful that sandwich was, I have to say this one is quite different from the one I first had. (Who EVER talks about how great airline food is? That’s like saying hospital food is good!?!) As I said, I’m sure they were all out to impress on that first flight and they did. The food and staff were impeccable.

Fast forward 40+ years and we are on a weekend get-away to the mountains. We stopped at this little roadside cafe/gift shop and decided to grab a bite to eat. Their special of the day was a Monte Cristo by another name HA! My, oh my, it was delicious! It’s a cross between a Monte Cristo and a panini! Could it get any better? This is my interpretation of their recipe.

To assemble, place a layer of cheese on the bottom of the roll. Add a layer of ham and a layer of turkey on the cheese. Spread pepper jelly generously on the top portion of the ciabatta roll. 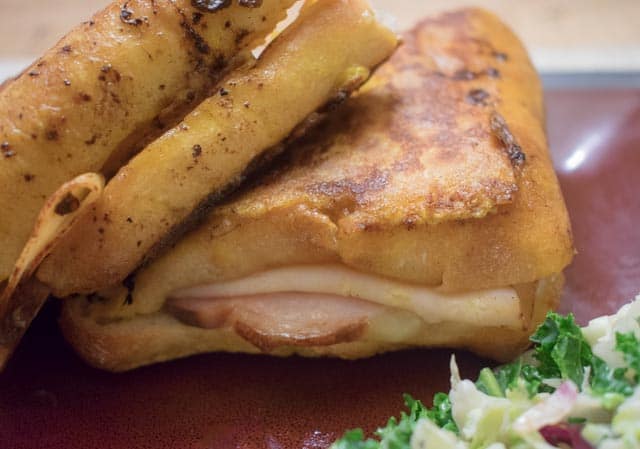 If I had to describe these wonderful sandwiches, it would be deliciousness in between french toast. These can be served with powdered sugar, syrup, or just as they are. They are delicious whatever way you serve them.