Do you ever have those days where you just do not want to cook? Or you have a refrigerator full of leftovers that you don’t know what to do with? Or maybe a combination of both? This dinner happened because of “one of those days.”

I am well known among my family and friends for just “throwing something together.” I am equally as well known for not writing down what I did making it almost impossible to duplicate. As I was mixing this up I decided it might turn out pretty well and it did! The beloved was excited when I told him I remembered the ingredients… now I can duplicate it for him in the future.

The ham was leftover from the day before as were the peas, the potatoes were looking as if they were about to sprout so they definitely needed to be used, same for the onions and pepper, the cheese was a little that was unused from another recipe I recently made. Let’s throw it all together and see what we come up with.

INGREDIENTS
4 cups ham, cubed
5 medium potatoes, scrubbed and sliced (I don’t peel mine but you can if you want to)
1 large onion, sliced
2 poblano peppers, chopped
1/2 cup English peas (it’s all I had but more would be nice)
2 tablespoons butter
2 tablespoons flour
2 cups milk, more or less depending on the thickness you desire (I prefer mine thinner)
1/2 cup pepper jack cheese (again, it’s all I had left)
1/2-1 teaspoon stone ground mustard
salt and pepper to taste
fresh parsley to garnish

Begin by making the sauce for the casserole. (This is a basic bechamel sauce with a few extras added to it.) Melt the butter in a large skillet over medium heat. Add the flour and cook for a minute or so until the “raw” taste is cooked out of the flour. Add the milk and whisk until the sauce thickens. You may need to add a little more milk if the sauce is too thick. You are looking for a consistency slightly thinner than pancake batter. Add the cheese, mustard, salt and pepper, and stir until the cheese is melted.

In the meantime, add the ham, potatoes, onions, peppers, and peas to a large mixing bowl. Pour the sauce over and mix well. Spread into a buttered 9×13 baking dish and bake at 350 degrees for 50-60 minutes or until the potatoes are tender.

I was honestly surprised at how well this turned out. The beloved kept talking about how delicious it was. You could add almost anything to this dish and it would be good… corn, mushrooms, asparagus, whatever you have on hand that needs to be used. 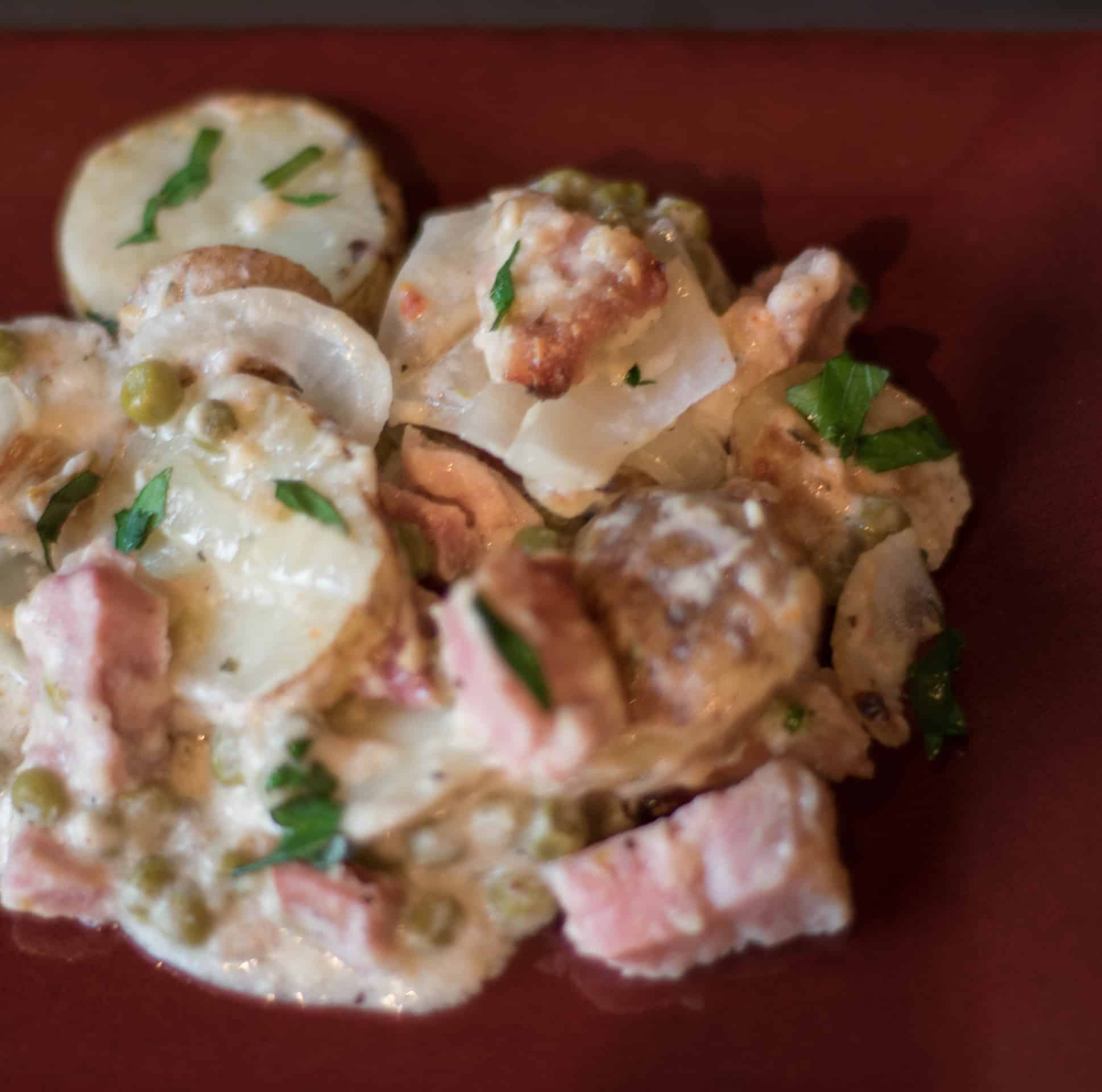 Sorry for the blurry pictures. I’m working with my daughter’s lens and I CAN’T figure it out!

I would love to hear about your favorite uses of leftovers. It seems to be a major issue for me and others.